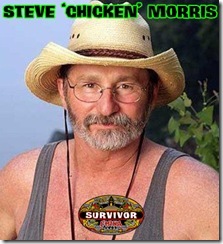 Our first contestant from the 15th season in China, Steve ‘Chicken’ Morris was the first booted from the season but still went on to become extremely memorable. For a country boy who had never travelled out of his home state, his experience in China was life changing, and one that live with him forever.

Starting off on the Zhan Hu tribe, Chicken was a strong character who helped build shelter and get everything setup. However with his strong character came a strong personality and he soon fell out with his tribe members, refusing to speak and help them if they didn’t respect him. Despite not being the weakest on his tribe, he was too much on the outs and was voted out first and the first person sent home from China.

In our interview with Chicken, he speaks about the experience of being out of his home town for the first time, the work ethic of his tribe and being voted out first, his various appearances after the game and being part of the Survivor ‘family’ as well as his favourite and most respected cast away of all time.