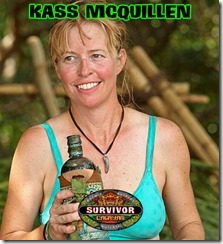 There is very little to be said about Kass McQuillen from the 28th season of Cagayan that hasn’t already been said. One of the most memorable, polarising and unique contestants in the history of Survivor, she made an impact on the season that nobody can quite explain and found herself seconds away from arguing for a million dollars. And in officially our longest and possibly most unique and funny interview of all time, Kass dishes the dirt on pretty much everything including CBS telling her she never had a shot at getting on the show right through to Jeff Probst, rooting and her fanny.

Kass started off on the Brains tribe and found herself battling early on, but made one of the biggest moves of the season post merge when she switched alliances to help vote out Sarah. From this point on she became a unique figure at camp and on our screens, and very nearly made it all the way to the end before being voted out in 3rd place.

In our chat with Kass, she talks about this possibly being her last ever Survivor interview, being pestered by older ladies while eating omelettes, applying for Survivor and being told she would never be on the show, why David & Garrett ruined the Brains tribe, putting J’Tia on ‘probation’ at camp, dealing with super strict producers at camp, Jeff’s line of questioning not being allowed in a court room, Sarah going a bit crazy before her vote out, the whole Llama situation and the Trish situation as well as dealing with numerous celebrities over the years, turning down Jeff Probst for sex and her Brian Heidik love!