In the game of Survivor one of the most important roles is that of the fatherly figure. Particularly amongst volatile tribes, a fatherly figure can provide the much needed stability and unification require to get a tribe to work together. While most fatherly figures are older contestants, some younger players have stepped up into this role and provided support for the more vulnerable castaways in the game. To follow on from his list of Top 10 Motherly Figures, Ozlet Jarrod Loobeek provides a glimpse of some of the many males who throughout their time on the show have stepped up into a fatherly role on their tribes.

During his short time on Survivor Fiji, Gary Stritesky more than earned his title of Papa Smurf, becoming a key fatherly figure on his tribe. Gary played an important role both at camp and in the challenges. This was particularly evident in the third episode of the season where he scored the opening point in the reward challenge and later on ate a pig snout to win the immunity challenge for the Moto tribe. If there was any doubt as to Gary’s importance to the tribe one needs only look at Moto’s reaction to his medical evacuation to see just how valued he was by his tribemates.

Another player on this list who didn’t make it far in the game but did show fatherly instincts during his time on the island. Mark or Papa Bear as he was known by his tribemates, didn’t immediately fit into the mould of the younger Savaii group and gravitated towards fellow outsiders Dawn and Cochrane. In true fatherly style Papa Bear offered advice to his fellow castaways during the initial stages of the game. While some of this advice wasn’t taken seriously, like his attempt to offer dating tips to Cochrane, he did offer truly sound advice when encouraging Dawn to endure the difficulties of the game and stick it out.

The second medical evacuee on the list, Bruce was a tough competitor who overcame many dramatic turns throughout his time on Survivor Panama. The Casaya tribe noticeably struggled during Bruce’s multiple trips to Exile Island and he was a clear anchor on an erratic tribe. Bruce was a hard worker around camp collecting water and firewood and delegating tasks to his fellow castaways. Far from being bossy, Bruce was generally liked by his tribe mates forming strong bonds with many of the younger players late in the game. Bruce became particularly close with Danielle towards the end and went on to vote for her at final tribal council. 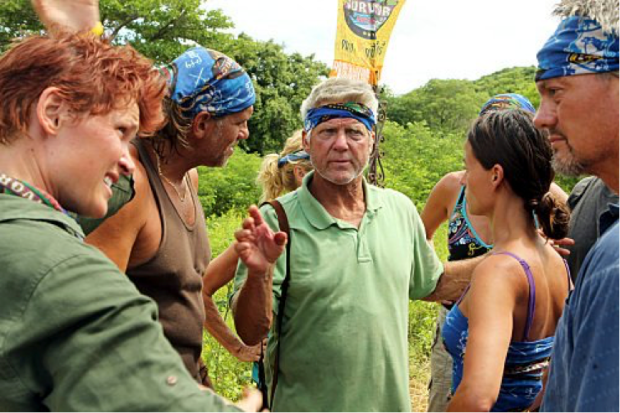 Despite being the third person voted out of the game, Jimmy Johnson or Coach as his tribe members called him was still a pivotal father figure during his time in Survivor Nicaragua. Despite not wanting to take a leadership role in the game, Jimmy was nudged into that position by his tribe mates, due to his history as an American football coach. While his advice at challenges and at camp did little to help the Espada against the younger more athletic La Flor tribe, Jimmy’s excelled at motivating and comforting individual tribe members. This was never more evident than when Jimmy gave Holly a powerful pep talk; consoling her and convincing her to stick it out and not quit the game.

Right from the start Jake was thrust into a fatherly role in Survivor Thailand. As the captain of the Sook Jai tribe, Jake selected the younger more athletic castaways during the tribe pick, which distinguished him as an obvious leader and counsellor due to his age. Throughout his time in Thailand, Jake was the real glue that held Sook Jai together, commiserating and comforting his tribemates. From mediating fights between Robb and Shii Ann to leading in the challenges, Jake was a level-headed figure that balanced the youthful exuberance of the Sook Jai tribe. During his time on Survivor, Tom was embraced as the lovable fool around camp, providing hours of entertainment for his tribemates and audience alike. In Survivor Africa, Tom immediately formed bonds with the members of his Boran tribe becoming particularly close with Ethan and Lex. Despite all the fun Tom had, he still managed to pull his weight around camp, collecting firewood and water when the opportunity presented itself. Far from just bonding with his original tribe, Tom quickly formed links with the younger castaways following a tribe swap and was a real bridge between the older and younger groups. Like a true fatherly figure Tom did his upmost to raise the morale of camp. From joking with Ethan about ham at the auction to doing handstands with Kim Powers, Tom Buchanan was a real jovial fatherly figure during his time on the show. 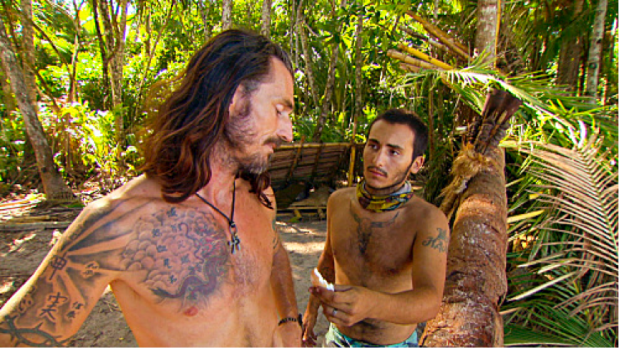 Fatherly figure or cult leader? Coach definitely trod a fine line between the two during his time on Survivor South Pacific but there’s no denying his gameplay incorporated many fatherly characteristics. Despite Upolu’s initial reservations about competing alongside a returning player, Coach was quickly included in a majority alliance on the tribe and from this point onwards he became the figurehead of the group. From morning yoga to group prayer, Coach set the tone for how the tribe would behave around camp, at the challenges and at tribal council. Coach’s role as a fatherly figure was particularly useful in controlling Brandon and influencing Cochrane to flip, with both of these players seeking guidance throughout the game. Ultimately Coach’s role as a fatherly figure put him in a dubious position at final tribal council where he failed to own up to his game.

A fatherly figure more so due to his age rather than a caring attitude, Rudy’s tenacity was admired by his younger tribemates on both of his seasons. As a former Navy Seal in his seventies, Rudy wasn’t hesitant in delegating tasks and expressing his opinion on how the camp should be set up and run. Despite this initially rubbing many people the wrong way, it soon became a somewhat endearing trait with his fellow Borneo castaways making a sign that read “Rowdy Rudy’s Kitchen” to hang at camp. If Rudy’s likability or respect is in any doubt, one only needs to watch his highly emotional boot in All-Stars to grasp how influential he was to his fellow competitors.

Given the nickname Pappy by his fellow castaways, Paschal English developed close fatherly bonds with multiple players on Survivor Marquesas. Starting out on the Rotu tribe, Paschal immediately became a provisional father figure for fellow castaway Neleh Dennis. Similar to Rodger and Elisabeth two seasons earlier, the friendship between Paschal and Neleh mimicked a real father daughter relationship and the two soon became inseparable. Far from just being friendly with Neleh, Paschal was respected and looked up to by many of his other tribe mates. For example, Sean and Paschal became particularly close during a helicopter and horseback ride reward at the final eight.

Perhaps one of the first true fatherly figures in the game of Survivor, Rodger is particularly remembered for his close relationship with fellow Kucha tribe member Elisabeth. Their father-daughter like bond was clear for all to see with both players vowing not to vote one another out and Rodger requesting to be voted out instead of Elisabeth at the final five. Apart from his caring relationship with Elisabeth, Rodger also displayed fatherly attributes in his commitment to the Kucha tribe. The primary example of this was when despite being a weak swimmer with a fear of heights, Rodger jumped off a cliff into the river below in the second reward challenge. As the first real distinctive fatherly figure, Rodger more than earns the number one spot on this list.