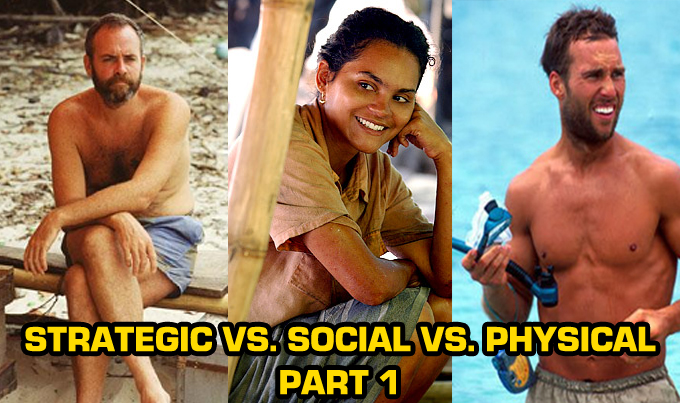 In the game of Survivor any fan would agree that there are 3 basic types of play, the strategic, social and physical games. Each different kind of gameplay has produced a winner. Some winners dominated in all 3 categories, some were not the best at any of them. In the first of a three part series, Ozlet Alec Culver makes his feature article debut as he tries to figure out what type of game play is truly the most successful. Read on to find out whether strategic, social or physical gameplay comes up trumps most often in the game of Survivor.

With the current season emphasizing Old School style, which focuses more on social game play, versus New School, which focuses more on style. I’m trying to figure out which ‘school’ is truly the better type of game play. In this 3 part series I will break down which one of the final 2 was the best at these 3 types of gameplay and every time a particular style wins, I’ll reward a point to that style. If the winner was the best at multiple styles, both of them will get a point thus making a point system to which game play is the best, but ultimately you can decide which one is the best. Strategic: I think this one is pretty clear as Richard pretty much invented the strategic game play of Survivor so in the strategic stand point, Richard wins hands down.

Social: This one is a lot closer. Kelly had good relationships with the minority alliance, Jenna, Colleen, Gervase among others but didn’t have a great relationship with some like Sean and Rudy. Sue thinks she played a horrible social game but I believe Richard really only had a social game with Rudy so I would have to say Kelly has the edge in this category.

Physical: Kelly had 5 individual challenge wins, Richard had 1. So this one is easily a win for Kelly.

Analysis: In this season despite Kelly having the edge in 2 of the 3 categories, Richard ended up winning so the strategic game play payed off.

Strategic: Although they both had bright moments of strategy, I think that Tina gets the edge just for the fact that she was on the right side of every vote, besides Keith of course, whereas Colby was not (refer to Amber vote).

Social: Once again both were good but Tina gets the edge. Her social game I think showed brilliance with the fact that Colby took her to the end, so she gets the nod here.

Physical: Colby had 7 individual challenge wins, Tina had 1, which she didn’t even win herself, so Colby is the clear winner.

Analysis: Tina was a good all-around player, besides the physical aspect, and that means she earned her win and so the strategy and social side both win this time around.

Strategic: Kim actually had to fight her way through the game, Ethan had a solid alliance and for that reason I think Ethan gets the advantage in this category.

Social: Once again, Ethan was just such a nice guy that he naturally had a strong social game. Kim didn’t have the greatest social game but it wasn’t something to be over looked, it just wasn’t shown as much as Ethan’s game. Therefore, Ethan wins this category as well.

Analysis: Ethan had one of the best overall games in the early seasons and it shows with his cruise to victory and so his strategic and social game earned him the victory.

Strategic: So this one is hard because they both played very similar strategic games but I think Neleh might get the edge here because she actually made the move to flip whereas Vecepia didn’t really have much of a chose. Also there are other small moments like the Sean vote out and such so Neleh gets the edge here.

Social: This one is a clear one. Although Neleh is a very nice girl, representing my home state of Utah, her social game was good, however, Vecepia’s social game was great and it showed with the final 4 immunity challenge, yes she had her journal, but it showed that she listened to her other tribemates and so that gets her the nod in this category.

Analysis: I think this is one of the closest final tribals we had in the first 10 seasons, it wasn’t until season 13 were we had another great final tribal council, but Vecepia got the win by one vote and so her social game proved worthy, with a mix of immunity wins as well.

Strategic: This one is a no brainer in this season. Brian had a clear strategy and he worked it to perfection. He easily wins this category.

Social: This one they both weren’t the greatest at. However, just because Brian’s crappy social game was never mentioned at final tribal, I have to give him the nod in this category as well. Clay was attacked for his social game at the final tribal, mostly by Ted, so it showed it wasn’t the best.

Analysis: Like I said there are some seasons that the winner is clearly the best player overall but I still don’t believe that Clay is the goat that everyone believes he is. Brian took him because he knew he had the votes to win against Clay. Clay played a great game but Brian’s was just better. 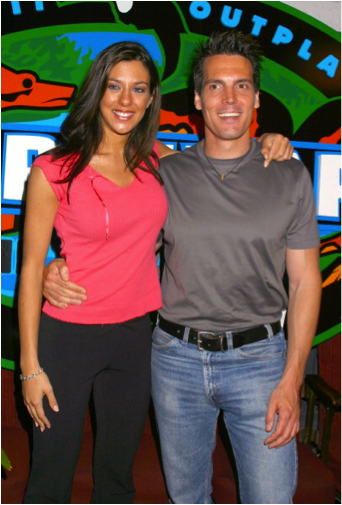 Strategic: Matt was like Rob’s protégé in the game and it showed strategically as the protégé eventually outsmarted the master, however Jenna’s strategic play was great as well. This one is a hard one to choose but I feel since Matt didn’t have to win immunity to survive, he gets the nod in this one.

Social: This one is a lot easier to choose. Although they both had moments of bad social game, I believe that Jenna had a slightly better social game than Matt, mostly because nobody thought she was mentally insane, just a brat.

Analysis: If Matt’s game wasn’t so much about riding Rob’s coattails, he would have had a much better chance to win the game but Jenna won when she had to and she deserved to win so her better social game really pushed her over the top.

Strategic: I think that Lil played a decent strategic game but Sandra’s ability to adapt when her allies were voted out, and the fact that she was the main reason that Jonny Fairplay and Burton got screwed over wins it for me in this category. Also, her famous quote is “As long as it ain’t me” which shows her great strategic ability.

Social: This is easy. Lil annoyed everyone, Sandra, although not perfect, had a much better social game, she actually had friends on the jury.

Physical: Lil had 3 challenge wins, 2 of which she won with a partner(s), Sandra had 0 either way, Lil would win just for beating Jonny Fairplay in the final immunity.

Analysis: Sandra deserved to win as she had the much better social and strategic game and even despite what the rumors might be, I don’t think Lil was as bad of a player as is portrayed.

Strategic: Rob was portrayed as being the strategic mastermind and although Amber was part of all the decisions, Rob clearly was the mightier force when it came to strategy.

Social: Another clear cut winner in this category. Amber built relationships, Rob destroyed them. Although the Jerri vote out is portrayed as a strategic move by Rob and Lex, I feel it was a great social play by Amber as well.

Physical: Rob won 6 challenges, Amber won 2, one of those wins they won together in a group

Analysis: It was Rob’s lack of social game that cost him the win. I think this is a great example of how choosing too much of one style might end up biting you in the butt. Therefore, Amber’s great social game ended up getting her the win. 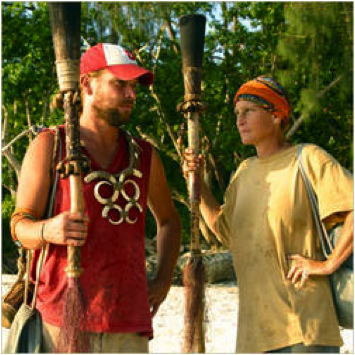 Strategic: Neither of them was a slouch at all when it came to strategy. In a small scene in the major flip episode where LeAnn goes home, it is mentioned by Chris that Twila is the one that came up with that idea and so because I think a lot of Chris’ strategic decisions were given to him because of his social game I have to give the edge to Twila on this one, I know you all will hate me.

Social: As I mentioned above, Chris’ social game is really what put him in a great position to win the game and then Twila’s social game was horrible so Chris gets the heads up on this one.

Analysis: Although people say Chris played the best in all 3 categories, which I agree that he did amazing in all 3 styles, he wasn’t perfect in strategy or he might have never been on the chopping block, so his social game is really what shines, and he won some challenges.

Strategic: Both had their strengths but the nod has to go to Tom in this one because Katie had her moments to become a great strategic player but she didn’t take them.

Social: Being that everyone hated Katie’s social game, Tom easily wins this one, like 100 times better than Katie’s game.

Physical: This is a laugher, Tom had 6 challenge wins, one in a group, Katie had 0, and Tom also had a lot to do with Koror dominating in every tribe challenge, while Katie watched.

Analysis: Another season where the winner clearly played the better game in any way possible, the difference is, I don’t think Clay was a goat, whereas Katie is the epitome of a goat. Tom had the strategy, strength and social game to win the money.

Is one form of gameplay more valuable than another? Do you agree with Alec’s assessment of each of the final 2? Leave a comment below to let us know your thoughts!

8 Comments on Strategic vs. Social vs. Physical – Part 1