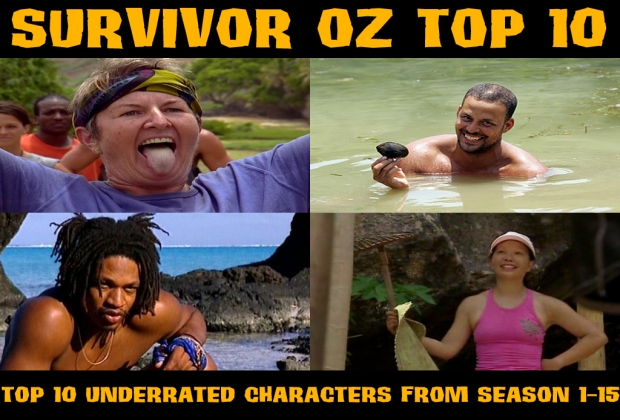 Entertaining characters can really make or break a Survivor season. It's well and good to see jaw dropping moves and brand new strategies but all these can fall flat without the unique and interesting personalities to go along with them. Throughout Survivor's 31 season run, many characters have garnered massive followings, more than earning the praise their entertaining antics were worth. However, on the other hand, there are some characters who perhaps deserve more recognition for their efforts during their time on the show. Today Ozlet Tom Shembrey brings you his list of the top 10 underrated characters from the Borneo to China era of the show. Read on to see which characters make the list. 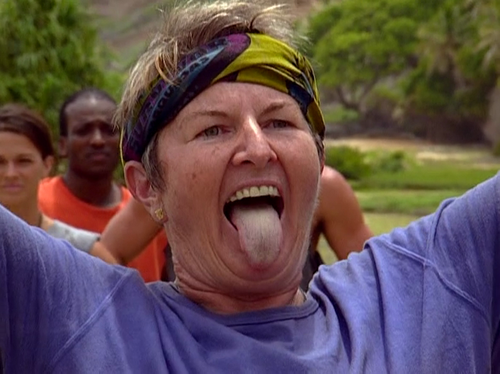 Lost in the history of Survivor, Patricia only featured in 2 episodes. Personally I found her funny and aggressive, and her rivalry with Peter Harkey shaped the early days of Maraamu. We saw her playing both the strategic game, bizarrely aligning with All-American Hero Hunter Ellis while throwing up Sarah’s name for the vote, and attempting a social game (although she did offside most of her tribe in doing this.) Patricia’s confessionals were insightful and reflected her frustration at others not mirroring her work-ethic. I doubt anybody would confess that Patricia is their favourite character, but I think she deserves more love.

Although he comes from a season many of you detest, Nate was actually a pretty funny guy for a chunk of the season. He made some great wisecracks about his African-American tribe in the beginning, and his expressions while flipping out over Parvati and her flirty-ness were hilarious. His celebrating after manihiki made fire was unusual, and he spent a lot of the midgame pissed off, especially when Cao Boi (who isn’t on this list because he’s not underrated) turned up randomly at their beach. Nate was also possibly a pioneer of the ‘blind-side’ face as he was often duped by the girls. All-around, Nate did his best to keep Cook Islands interesting. Which is to say he failed at that, yet he failed kind of humorously.

She’s hardly what you would call an enjoyable character, but Janu’s story arc over the first half of Palau was interesting, resulting in her being the second player ever to quit in order to protect Stephanie Lagrossa (definitely NOT on this list.) she was also the first castaway abandoned on Exile Island, and her tribe mates reaction to this was unfair but amusing. Janu was shielded in the premerge due to Koror’s dominance, however her tribe knew she was the weakest and thought she would die alone on a beach. Hilarious I know. Her wishy washy-ness before the tribal in which she was eliminated was great, and her byplay with Jeff before she quit was fascinating, back when Probst consider it an insult if you quit his game.

I found Sylvia hilarious simply because she was always doing something her tribe didn’t appreciate, and often she was unaware of this. she assumed control of the pre game tribe to construct the lavish shelter in what we all know is a complete survivor faux-pas, and the cast did not respect her career as an architect as she struggled to maintain control against Rocky (pronounced rworckee). Getting sent to exile island was a blessing for “ducky” kwan as she avoided being the first boot, however she continued to irritate Ravu as soon as she arrived on their beach. She got votes at both tribals she went to, and packed her bags for exile again. She bumbled about looking for the clue, then she got booted as her tribe split the vote. Her storyline wasn’t so much as an arc, more so an ever decreasing slump. Still a great castaway.

Shane powers is way too rated to make this list, but surely his rival Courtney Marrett can slot in here. First  time I watched Panama, I hated her; how dare she do stupid Pilates in the legendary Zen garden of Bruce kanegai, which represents Mayfair in survivor Monopoly. Now I appreciate what was stupid and ridiculous about her; who brings firesticks as their luxury item??? She went fully hippy at the sight of a Dead Sea turtle, frustrating her tribe mates as she pontificated its symbolism of fertility and motherhood. Courtney criticised Bruce’s awesome water filtration system. Her greatest moment came at the final 7 reward where she was labelled most annoying and other negative insults by her tribemates. (This challenge definitely deserves a rewatch, it’s awesome.) she almost beat King Deitz in an immunity, and despite becoming a huge goat, her torch was snuffed at final 6. Excellent character, who took it and gave it out especially with Shane. 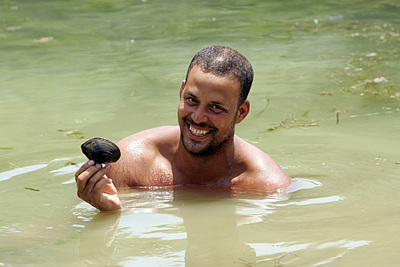 (Maybe not underrated enough, which excludes him from clinching number 1.) My favourite all-time character, the Emperor of China Jean-Robert was such a savant and a chauvinist that it made for hilarious viewing. He made a fantastic foil to the queen of sass Courtney Yates and had some one-liners that still crack me up; hey James you know what’s the only thing better than a million bucks? A million bucks and some ASS! What a legendary pick-up line. We hail him as the self-proclaimed bad boy of poker and strategic mastermind, who feared physical threat Courtney above all else. #bringbackJRB

She was the dancing fishmonger who would’ve been the best winner ever had she snuck into the Finak Tribal Council. Her like-ability made up for her utter hopelessness in challenges (the basketball trampolines is her worst performance) yet it what drove her to be knifed at four as she was a jury threat to be feared. The fishmonger brought in dinner despite losing her tribe the initial reward hike. She was on the bottom early but locked in with Brian Corridan and Mystery man Gary Hawkins* and eliminated other castaways despite her own challenge in-ability. Even the way she spoke cracked me up, and the image of her wacking out bizarrely at some point in the post-merge is too memorable for me. Robbed of an edit Lydia was fantastic, light and humorous, and she was also an under-dog that fought for her game. 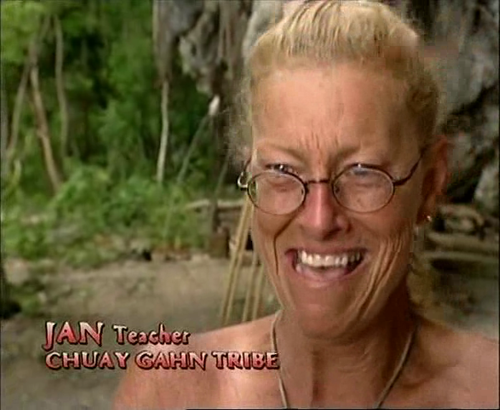 So many great characters in Thailand, it was almost impossible to select just one. It had to be Jan (sorry John Raymond.) she was the precursor to so many hilarious older females, most notable Nicaragua Jane. From the weak and conflicted tribe she selected initially, getting lost searching for water and yelling in excitement she was betting in the survivor auction (“it’s a gamblin thing”). Jan conned Helen amazingly at final four to put herself in final three, but she couldn’t compete against the men in the final challenge and was eliminated.  She kissed Probst before it wasn’t mainstream to do that. But we can’t forget her greatest moment. What was the deal with her pet cemetery? Why would she bury a dead bat and the chewed up bits of chicken? I reckon this was the most random act on survivor to this point? Maybe the shelter from rawks was odder but this was almost creepy and for me, signifying Jan’s descent into madness. Hilarious madness. 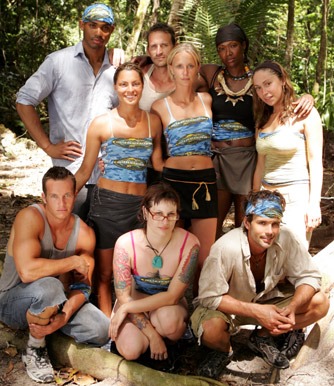 Yeah I know. I know it’s not a character and I’ve broken my own rules. But otherwise 9 slots on the list could’ve been filled with just Ulong-ians. I said it was almost impossible to choose 2 Thailand-ers. No way could I only have 1 Palau-an They were younger and fitter. Yet they went on to lose every immunity challenge. They completely fell to pieces in the 1st challenge after which Jolanda took over and set the tribe further back. Jolanda’s aggression and animosity with Stephanie characterised the second episode. From the ashes of Jolanda rose the Angie-Jakusz-Phoenix, who provided witty confessionals and a sweet character arc; “We aren’t going back to immunity!!!” Great line. Ulong seemed to troll survivor; they voted out their leaders, blitzed rewards and got destroyed in immunity challenges. Then the tribe got controlled by a budding show-mance to keep weaker Kim. A coconut smashed Jeff’s ankle, Probst ripped into them at the build-your-bathroom challenge and they continued to shed tribe mates. James Miller was a great character, and his descriptions of his battle with Coby Archa blurred current political correctness boundaries and cracked me up. Ibrehem was intriguing, and his performance in the bottle-diving challenge was laughable.  Bobby-Jon was kind of cool and his grunt was admirable. Stephanie was actually good this time around, and her fate was pitiable. This tribe is great and slots in as the 3rd best all time premerge; Villains, Casaya then Ulong. Imagine some of these crazies playing a post-merge game?! Wow

Who? Oh that guy? Really? But let me tell you, this guy had it all. His disgruntled confessionals as the younger players took control premerge was Rudy-esque, and when he gained power with T-Bird post swap, his gloating was revoltingly good. Does anybody understand why he thought he was an elephant when he was waving his arm in the air. while he didn’t have a whole heap of strategy, his confessionals were always interesting and toed the PC line. His reward challenge with Brandon was fantastic. The awkward look they gave each other when they won, despite that they hated each other was hilarious, and then his comments during the movie were sometimes homophobic, sometimes rude but always funny. He was obviously cast as the same character as rudy; the older guy who runs the tribe the wrong way with his army regimen and strict adherence to rules, however for me he is one of the better iterations of this castaway type. Frank was a great character who was memorable during the season yet disappointingly has faded from survivor memory. Remember the Ele-Frank.

Note #1: No first boots were on this list as it was too hard to judge whether they just had one good episode or would’ve been always good.
Note #2: Players presence on this list is a balance between character and how little they are remembered.
Honourable mentions: Lisi Linares, Brian Corridan, Anthony Robinson.