The thirty-second season of Survivor, Kaôh Rōng, barrels forward as we continue the merge portion of the game. After an entertaining episode, it’s time to recap it! Joining us, we have our recap expert, Clifton, plus Ben and the Ozlets chime in with their thoughts as well! Oh, and we’ll even speak to a real expert in our good friend Ashley Trainer, from Survivor: Samoa!

(If you haven’t watched this weeks episode yet, clicking the link below will spoil the hell out of it, so if you don’t want to be spoiled then don’t click the link!)

“After a blindside, Jason, Scot, and Tai were on the bottom and wreaking havoc around camp. Julia saw their villainous antics as a perfect opportunity to get further in the game, but everyone noticed that Julia was playing both sides. Facing Tribal Council, Debbie exposed the majority’s plan in front of Julia, and it put a target on Debbie’s back. At Tribal Council, Jason, Scot, and Tai showed off their idols to elicit fear and were prepared to play the super idol, which gave the majority more of a reason to vote out one of their own. Eight are left. Who will be voted out tonight?” ~Jeff Probst

As they get back to camp, the three men talk about how well Tribal Council went for them. Tai gives the idol back to Jason, saying he doesn’t have room for it. Jason confesses that the chaos they caused made the others turn against each other. None of them went home and they still have the super idol. Their plan worked. 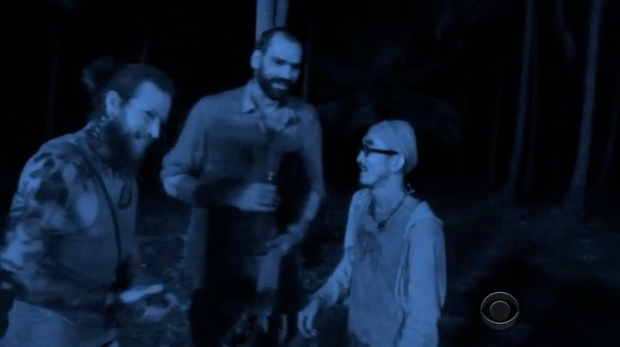 The next morning, Tai suggests to his alliance that they start to provide and restore harmony to the camp again. Scot says that he will have to have a talk with Aubry to see if it is possible. He tells Aubry that if they are on board with voting out Cydney, who is the person that they have beef with, they will bring peace back to the camp. Aubry confesses that she is aware that Scot is trying to manipulate her and there is no way that she is going to be working with him. She needs to do something to stop the guys, but it’s going to be a “big, scary move”. 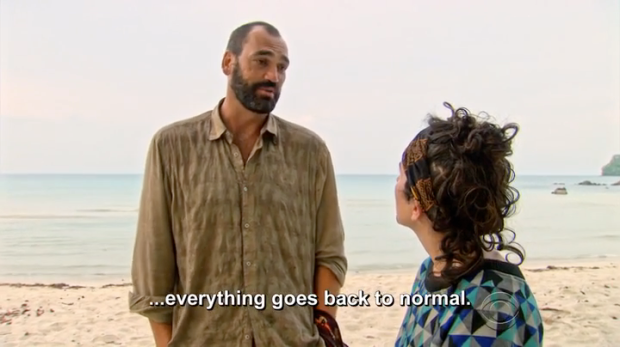 The Reward Challenge is a new take on the Survivor auction. The contestants will have a chance to compete for either an advantage in the game, food, or letters from home. Each contestant will place a foot on a beam to support a pot on the other side of the beam. Should they put their foot down, the beam will drop and the pot will fall and break. Last person standing in each reward category wins that reward. Julia and Joe compete for love letters, and Joe almost instantly drops out of the match, giving Julia the win. Michele competes with Scot and Jason for a massive cheeseburger, which she is able to win. Tai, Cydney, and Aubry compete for the advantage in the game. Cydney is the first to drop, leaving the battle between Tai and Aubry, which Tai is able to win after Aubry loses her balance. Scot confesses that Tai winning the advantage was the best thing possible for their alliance.

Tai and Aubry battle for the advantage. (Image credit: CBS)

Back at camp, the winners are congratulated for their efforts. Michele confesses that it is nerve wracking for Tai to have won an advantage when everyone knows that he has an idol. Tai walks off on his own to read the advantage, and he find that he has won himself an extra vote which can be played until five people are in the game. He confesses that he has a rich man’s problem of trying to figure out the best way to play them. Julia reads her letters from home, and she confesses that they give her the boost she needs to keep going. She approaches Michele and Aubry with a plan to flush Tai’s idols, while secretly keeping her alliance with the men intact. Aubry confesses that Julia is playing a good, respectable game, but she thinks she is shady and doesn’t want her next to herself.

The women strategize their next move. (Image credit: CBS)

The next morning, Aubry approaches Tai and tells him that she is not sure if she is cut out for the game. He agrees that he has felt the same way. It is a constant battle of heart and brain. Tai confesses that he doesn’t have much in common with people out there, but he likes Aubry’s energy. Aubry warns Tai that some of the women are going to want to go after idols, including his. She tells him that he can trust her and work with her. Tai confesses that she will be a good contribution to his alliance as long as Scot and Jason are on board. Tai approaches Scot and Jason and tells him that Aubry is willing to give him information. Scot immediately suggests that they vote Aubry out next. Jason agrees and the ball is set into motion. Tai confesses that his wants and needs fall on deaf ears.

For the Immunity Challenge, each contestant must stand with their arms spread eagle holding discs against a post. The discs are connected to pots and when the discs falls, the pots break. Last person with their pots intact wins Immunity. Joe drops out almost immediately. After twenty five minutes, Scot, Julia, Tai, and Michele drop out. After forty five minutes, Cydney drops out. The final battle is between Aubry and Jason. Aubry psychs out her competition by saying that she expects Jason to win because he has been through everything. Why wouldn’t he win this? They hit the one hour and fifteen minute mark. Jeff implores that they “DIG!”. Aubry finally drops out and Jason screams in victory before going to give Aubry a hug. Jason confesses that the three of them are safe tonight, and from there on out they are unstoppable. 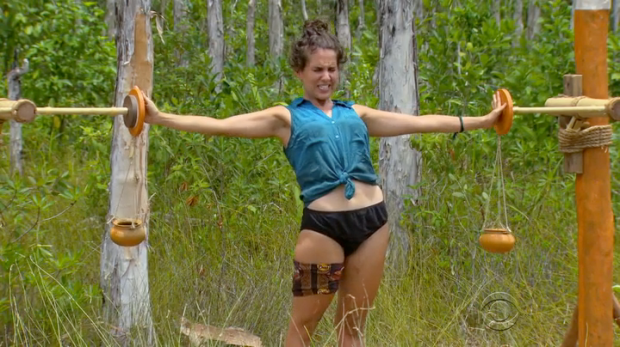 Aubry gives her all in the Immunity Challenge. (Image credit: CBS)

Back at camp, the women tell Aubry that she was incredible. The men congratulate each other for one of them winning and reaffirm that Aubry is the one they are voting out. Jason confesses that there is nothing Aubry can do. Julia talks with the men and tells them that they are going to vote for Tai to flush the idol. They tell her that after tonight if she joins them they will have the numbers, then they can blindside Tai and go to the Final 3. Julia confesses that they are the kind of people you want to sit with at the end of the game. Aubry and Cydney start plotting how they can get rid of Scot. Aubry says that she might be able to get Tai. She approaches him and tells him that they are gunning for him, but she wants to get Scot out instead. Tai confesses that his heart is telling him to go with Aubry, but his brain is telling him to go with the men, who he can beat. Aubry confesses that she has no idea what Tai is going to do. Jason gives his idol to Scot so that each of them has a form of protection. The tribe departs for Tribal Council.

Aubry tries to get Tai onboard. (Image credit: CBS)

Jeff begins Tribal Council by asking about the display of power the men made at the last Tribal Council. Michele says that it is nerve wracking. Jeff tells Scot that he was also telling his opponents to “bring it” by making such a display. Jason says that their psychological warfare worked, and Debbie went home. Aubry says that fighting against them is like running into a wall. Jason and Scot say that they have never hid anything. They’ve been open and honest. Cydney says that she is looking at who is competition at the challenges which she hasn’t been winning. Jason points out that the two challenge winners, himself and Tai, are safe tonight. It is noted by Jeff that Aubry also has been providing incredibly strong performances at challenges. She is clearly more than just a Brain, and she has the respect of the rest of her tribe. Jason says that everyone else should jump on the train, or else the game will be dictated for them. They vote. Jason votes for Aubry, saying that it is only because she is such a great competitor. Aubry votes for Scot, saying “please!” seven times. Jeff retrieves the votes. Julia tells Tai to play is idol, Scot tells him not to. Tai holds onto it. Jeff reveals two votes for Tai, two votes for Aubry, and a majority of four votes for Scot. Scot turns to Tai expectantly. Tai looks between his two alliance mates. Jason nods his head at Tai to give Scot the idol. Tai doesn’t move and then he slowly shakes his head. Scot asks, “You’re not doing it?”.  Tai says, “No“. Scot simply says, “wow“, and grabs his torch. Julia looks shocked. The Jury look shocked. Aubry and Cydney smile. Scot’s torch is snuffed. Jeff notes that just when you think you’re safe, another blindside. Seven are left. 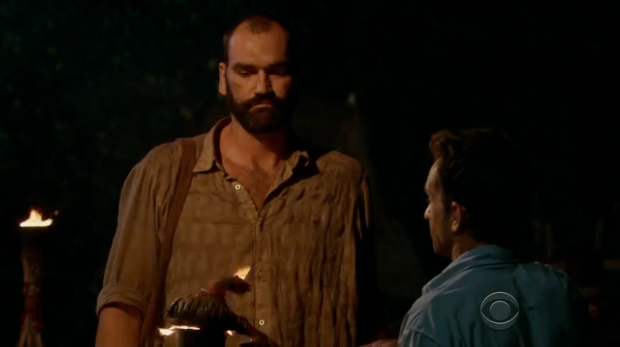 NEXT TIME ON… SURVIVOR

“After betraying Jason, Tai’s on top of the world, but Jason and Julia are out for blood.” ~Jeff Probst (Image credit: CBS) 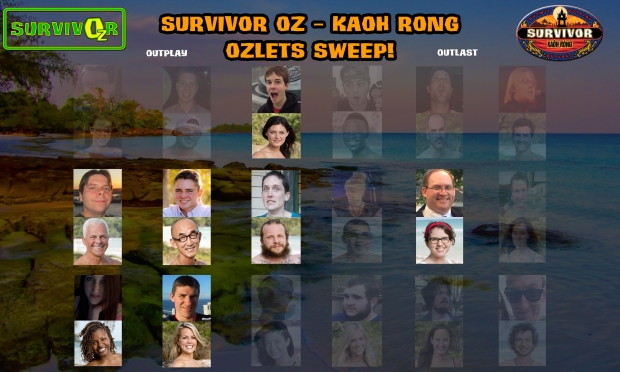 The word that definitely describes this episode is “wow”. The guys had a solid game plan and potential access to the super idol if they stayed together, which put an obstacle in front of the women. But Aubry found a way to remove that obstacle. She brought Tai over from the “dark side” and that crack was enough to blast that obstacle away. Looks like we may not see the super idol in action, but maybe it’s for the best. The threat of it and the strategy revolving around it makes up for it. Now we are left with seven players playing seven different games. Even Michele and Julia, who early in the season were remembered solely as Anna’s second and third in command in the original Beauty alliance, have developed different styles of play. Tai is going to continue to be the centerpiece though with his advantage and idol. Whether or not he can forge a path to the end is unclear but he has been a good player and memorable character. People have been saying for a while that it looks like a woman will win this season, and aside from Tai somehow making it to the end (and even then I don’t see him as an obvious winner, especially after cutting Scot), that will likely be the case.

Each week this season we’ll bring you the viewpoint of at least one former Survivor contestants to hear what they think of the episode and their thoughts for the rest of the season! Our recap for episode 10 features our good friend Ashley Trainer from Survivor: Samoa! Ashley discusses everything that happened during this episode as well as looking ahead to the rest of the season with her answers to the ‘Kaoh Rong 5!’

Join us again next week as we recap and discuss the eleventh episode of Kaôh Rōng!