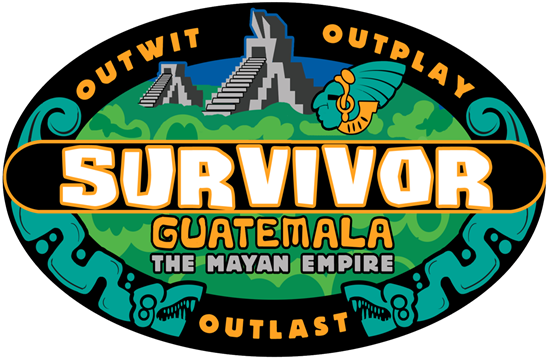 Survivor: Guatemala – The Maya Empire is the eleventh season of Survivor.

For the first time in Survivor history, two previous castaways returned to have another chance at the title of Sole Survivor. Survivor: Palau contestants Stephenie LaGrossa and Bobby Jon Drinkard returned to lead their tribes Yaxhà and Nakúm, named after locations in Guatemala. When ten contestants remained, the remaining castaways merged into one tribe, Xhakúm.

Two Returning Contestants – Two former contestants returned for another chance to win. This twist would be repeated for Survivor: Redemption Island and Survivor: South Pacific.

Tribe Switch – On Day Eight, the two tribes were switched.

Double Tribal Council – Both tribes were told of a double elimination, the tribe who won Reward would compete for Individual Immunity and then that person would observe the losing tribe’s Tribal Council and vote for one person to be immune from the vote.

Hidden Immunity Idol – Located around the Xhakúm campsite was a small wooden totem that could be used as a form of Individual Immunity, clues were given to winners of challenges to find it and play it before the vote to detract particular voting blocs from targeting him/her. Once the Idol was played, it was retired.

Episode Three: The Brave May Not Live Long, but the Cautious Don’t Live at All

Episode Four: To Betray, or Not to Betray

Episode Nine: Secret and Lies and an Idol Surprise

Episode Ten: Eat and Sleeping With the Enemy

Episode Eleven: Everything Is Personal

Survivor: Guatemala was the first time in Survivor history to feature returning players with new players. Stephenie LaGrossa and Bobby Jon Drinkard from ‘Survivor: Palau’ both returned with sixteen new contestants. Stephenie became a member of the Yaxhà (teal) tribe alongside Amy, Brian, Brianna, Gary, Jamie, Lydia, Morgan and Rafe. Bobby Jon joined the Nakúm (yellow) tribe along with Blake, Brandon, Brooke, Cindy, Danni, Jim, Jud and Margaret. At the beginning of the game, the two tribes started off with a challenge straight away which saw the two tribe’s race through the juggle on an eleven mile hike to earn the right to live at the better of two campsites and also receive flint. Nakúm managed to get their first, despite most of the men on the tribe getting severely dehydrated. Nakúm therefore lived at the base on the Mayan Ruins; however, a better camp and fire didn’t help them win the first Immunity Challenge, which Yaxhà managed to win; they received flint and it marked the first occasion Stephenie had won Immunity in Survivor. In the first Tribal Council, Jim, the oldest castaway in the season was voted out because he torn his bicep in the inaugural Immunity Challenge.

Soon after Brianna left, the tribes meet in a Reward Challenge that rewarded individual contestants. Amy and Gary from Yaxhà and Judd and Margaret from Nakúm were rewarded with a picnic. While they were gone, Brian and Cindy were voted by their tribe mates as the castaways with the most tribe pride on Yaxhà and Nakúm respectively. The reminding contestants then switched tribes with Cindy being joined by Brooke, Jamie, Judd, Lydia, Margaret, Rafe and Stephenie on Nakúm and the new Yaxhà tribe consisting of Amy, Blake, Bobby Jon, Brandon, Brian, Danni and Gary.

The first Immunity Challenge following the Tribe Switch saw Yaxhà pull out a win, sending Nakúm to Tribal Council. Judd decided to align himself with the former Yaxhà members, turning on his former tribe members in order to vote out Brooke. Back at Yaxhà, Blake was annoying his tribe mates with his stories and Brian pushed to get him voted out to even the odds between the tribal lines. This worked as the former Yaxhà members decided to turn on Blake, sending home the “golden boy” and keeping Brian. This left three former Nakúm and three former Yaxhà members as part of the Nakúm tribe. At the next Reward Challenge, a twist was revealed that would see both tribes attend Tribal Council. The winners of the Reward Challenge won themselves the right to win Individual Immunity. During the challenge, Bobby Jon and Jamie clashed as their competitive juices flowed and Amy re-injured her ankle. Nakúm won and moved onto the Individual Immunity Challenge which Rage won, allowing him to attend both Tribal Councils and pass Immunity onto a member of Yaxhà. Nakúm’s Tribal Council saw Judd and Margaret having a heated discussion about his behaviour which resulted in the latter being voted out. Yaxhà’s Tribal Council saw Rafe gave Individual Immunity to former tribe member Gary; however it was Brian who was voted out for being untrustworthy.

Despite being a close tribe, Yaxhà would lose the last tribal Immunity Challenge before the Merge with Amy getting voted out because she was still struggling with a sprained ankle. Once Amy was voted out, Jeff announced that the Yaxhà tribe would not go back to their camp, instead they were merging with Nakúm at their camp, thus creating the merged tribe Xhakúm. Tribal divisions became immediately apparent and the feud between Jamie and Bobby Jon reached a climax. Despite Jamie being perceived as annoying and a challenge threat, the Nakúm alliance of six stayed strong and together voted out Brandon.

The next Reward Challenge saw the castaways compete for different food rewards. Jamie finished in fourth place, however he decided to forfeited his spot, offering to take the least appealing plate of food in order to make up for his bad attitude towards the former Yaxhà members. At the same Reward Challenge, Judd won the clue for the first ever Hidden Immunity Idol in the history of Survivor. He told a lie that the clue said it was on ground, while the actual clue said otherwise. Knowing that he was next to go, Gary went to look for the Idol where he discovered that Judd was lying about the Idol being on the ground because he looking up in the trees. At Tribal Council, Gary surprised everyone as he produced the Idol. With Gary immune, Bobby Jon was voted out instead and become the first Jury member.

Jamie was next to go after his paranoia became too much for everyone on Xhakúm to deal with. Lydia, Rafe and Stephenie decided to blindside Jamie before Gary, leaving Judd in the dark about the plan. This upset Judd and he argued about it with the rest of his alliance. The next morning Gary tried to get information from Lydia, while Judd was watching, causing Lydia to get alienated from the majority alliance. At the next Tribal Council, Judd claimed that he hadn’t lie at all during the game, causing Gary to call him out on his lie about the Hidden Immunity Idol clue. Despite his best efforts, Gary was voted out.

Gary’s boot left Danni as the only Yaxhà member left. In the Survivor Auction, Danni bought an advantage for the next Immunity Challenge. Judd was the successful bidder of a family visit with his wife and he choose Cindy’s twin sister and Stephenie’s boyfriend to join them for a night back at camp, leaving Danni, Lydia and Rafe to be sent to that old Yaxhà camp for the night. Danni and Rafe used the time at the old Yaxhà camp to bond. At the Immunity challenge Danni used her advantage to help her win the challenge, throwing a wrench in the plans of the majority alliance. At first, it was Lydia’s name that appeared to be on the chopping block, but Danni and Lydia tricked Judd into revealing that he wanted to vote off Stephenie. Deeming him untrustworthy, Judd was blindsided, leaving some parting words for the remaining castaways as he left.

At the final five, Cindy won the car challenge and had the chance to give the other four contestants a car, instead of taking the Reward for herself. Cindy turned down the offer, causing Rafe to be confused over her decision. After Stephenie won the Immunity Challenge, Rafe lobbied to vote off Cindy, decided to keep Danni because she had promised to take him to the end of the game. At the Final Four, Rafe won Immunity and decided to vote off Lydia because of the threat she was becoming if she made it to the Final Tribal Council.

At the Final Tribal Council, Stephenie was criticized by most of the Jury for backstabbing her allies sooner than she needed too, whilst Judd called Danni out for “skating” her way through the game.

At the Live Reunion Show, despite Judd’s comments, Danni gained six of the seven Jury votes, (with only Rafe voting for Stephenie), making Danni the Sole Survivor.

Stephenie LaGrossa would later return for Survivor: Heroes vs. Villains. 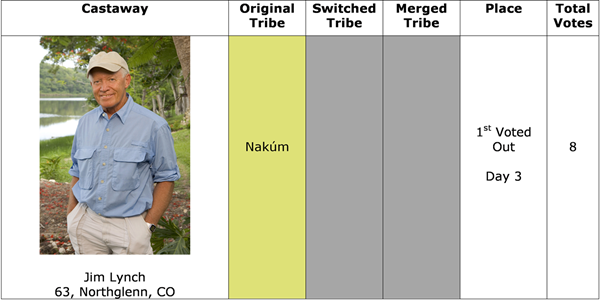 – This is the first season of Survivor to include both new players and returning players.

– This is the first season of the "one returnee per tribe" format.

– Guatemala is one of two seasons of this format, in which all returnees made the Merge (the second one is Survivor: South Pacific).

– This is the only season in which all the returning players improved upon their placements compared to their previous seasons.

– This is the first season of Survivor to feature the Hidden Immunity Idol. This is also the first time someone found and played an Idol.

– Wanda Shirk, Jonathan Libby, Michael Skupin, and Rodger Bingham were considered as returnees, before the decision was made to recall Stephenie and Bobby Jon.

– This is the only season so far with no African-American contestants.

– This is the first season where a new player defeated a returning player in the Final Tribal Council.

– This season and Survivor: One World are the only season to have no first-time contestants return in a future season.

– Gary became the first contestant ever to play a Hidden Immunity Idol on the tenth Tribal Council.