In the lead up to the 30th season of Worlds Apart and to celebrate the 15th year of Survivor, the team here at Survivor Oz has put together an expert panel to rank every single contestant to have ever played the game. From 442 through to number one, the panel sit down and discuss the pros, cons and everything else in between of every player from every season and that entire discussion has been recorded for your entertainment as we bring you this EXCLUSIVE ‘rankings cast’ that we are sure will cause significant debate with each episode! Today we continue on with episode 3, which ranks contestants from 200 through to 101! Click below for more!

A select panel of 5 Survivor experts was chosen to sit down and rank each single cast member in the history of Survivor. As of the 29th season of San Juan Del Sur there were 442 players who played the game. This list does not include Melissa McNulty from Fiji as she is deemed to have quit before the game started, nor does it include Craig Saint-Amour who was withdrawn before Blood vs Water and the two contestants withdrawn from San Juan Del Sur prior to it starting. For players who have played on multiple seasons, they are only counted ONCE, meaning that they are ranked based on their combined time on Survivor rather than their individual games. Each episode an order is selected for the panel to go in. For the first episode this was decided via a random generator on random.org. For the next episode that followed, the order was reversed. For episode three the order was changed to allow one of the three people who hadn’t had a go at being first and last to have that chance, and then it was reversed again. Also from episode three onwards, the order was changed every 50 spots, and simply reversed. For the final two episodes the sole remaining person who hadn’t gone first went first, and the remaining order randomised. Then in the final episode the person who went first in episode four went last to ensure each person had a go at going first and last. The remaining order was also randomised. At the turn of each person, they would select the Survivor contestant they deemed appropriate to go at that spot. If the majority of the panel agree, that contestants spot is finalised. However, if the majority of the panel disagree, they can ‘veto’ a choice, and the person then has to pick again, with the ‘vetoed’ contestant still eligible to be chosen at a later date. Any member of the panel can veto at any point if they wish, and non-successful vetoes are still counted as having a veto against a contestant. However for a contestant to be ‘saved’ and placed later, at least 3 out of the 5 panel members must agree to veto that choice. If 2 out of 5 do, it’s unsuccessful and the voting continues. After any veto is mentioned, the panel member has a ‘right of reply’ to defend their choice, whilst the panel member who vetoed also has the option to give their argument, potentially swaying the other panel members to change their mind. 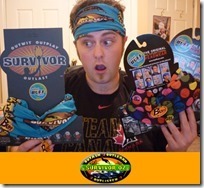 Paul Luttrell (Ozlet)
Each episode was initially only planned to run for three hours, however with the length of the rankings and the amount of discussion/debate had over the choices, this quickly blew out for each episode. It was decided that episodes would be edited together as one full length episode, and then separated into ‘parts’ to allow for smoother downloading and listening. Episode Three went for a total length of 8 hours, 43 minutes and 25 seconds (a record at the time of recording for longest episode ever) and has been separated into five parts for your convenience. You can download each part via the buttons below:

You can also download our high res cast photo of every single contestant in the history of Survivor together in one photo here
The FULL LIST of ranked contestants will be released after the fifth and final episode. Episodes will be released in the coming weeks and prior to the premiere of Worlds Apart on the 25th of February. Don’t forget to join in the conversation using #SozRanks and comment on this post below to let us know your thoughts on the rankings this episode and give your predictions for the remainder of the countdown!