Wednesday is here once again and it’s time for your favourite part of your Survivor Oz week with our weekly top 10! After CBS last week gave you their very own top 10 (which was a fail in itself), your host with the most Ben Waterworth sits you down with our version of the 10 dumbest moves in the history of Survivor! There have been plenty of moments in the history of the show that have made people question what they were seeing, but will your moments make the top 10? Click below to find out!

We’re used to getting our fair share of criticisms for our top 10s but for once we were glad last week not to have the worst top 10 on a Wednesday! Yes CBS came out with a very interesting ‘top 10 dumbest moves in the history of Survivor’ list, which did contain a few of the ones you would expect but was very heavy with recent seasons on it (three San Juan Del Sur moments, really?!). For some reason, this is a top 10 that we have failed to do, so now is the perfect opportunity to finally give you this list! I have gone over all the perceived ‘dumb moves’ in the history of the show and decided to make only one moment per season eligible for the final 10. Other moments that missed out I have included in the ‘honourable mentions’ and I am happy to say that no San Juan Del Sur moments made the final 10. Read on! 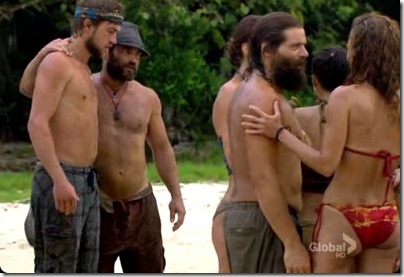 This is a hard one for me to add because in all honesty the move itself wasn’t necessarily ‘dumb’ as there was no way JT knew of Russell and his past discrepancies on Samoa. But hindsight is 20/20, and the move itself cost JT and the Heroes any shot of winning the game. It was a risk, but a lot of moves on Survivor are. Had the move worked, then we probably would be praising it as one of the greatest moves of all time. But it didn’t, and instead it ends up on this list.

Slightly ‘controversial’ entry to move forward with the list, but it’s something that I feel doesn’t nearly get much criticism as it probably should. While Richard was all about alliances on Tagi, setting up the way in which Survivor would be played as the game move forward, Jenna and Colleen were instrumental in blocking any attempts made by Joel & Gervase to create their own alliances and stop the eventual ‘Pagonging’ that would follow. Imagine how different Borneo could’ve been had voting blocks and alliances been something that both tribes did, instead of just one? Well at least we got a great adjective to use out of it.

Firstly let me point out you will not see Colby taking Tina to the end of Australian Outback on this list. It has been perceived as ‘dumb’ by many, but the guy lost by one vote. I can’t call a move that very nearly won him the game AND kept his dignity and respect at the same time as ‘dumb’. Woo on the other hand? Well did he ever stand a chance against Tony? Kass, yes. He pretty much had it won. Whereas the final vote of 8-1 against him was as close to a blowout as you can get without it actually being a blowout. Maybe Woo just likes $100,000 better than $1 million.

Oh Penner. One of the best characters ever to play Survivor, but he has never had luck in the overall strategic side of things. Cook Islands was all over the place, Micronesia was setting up for something before he got injured, then we had Philippines. It looked likely that he had learned and was able to get himself into a winnable position. But then when the opportunity comes to lock in a final 4, what does he do? Refuses the alliance and basically packs his own bags home. Simple rule of Survivor: if somebody offers you an alliance, just say yes. You can deal with the consequences later. If you refuse, nothing good will come out of it. Just ask Christy Smith.

Vanuatu was arguable the most divided season in terms of the sexes and it all came to a simple conclusion (or so it seemed) when Chad was voted out and it was 6 women versus 1 man in Chris Daugherty. Vote Chris out. Easy right? Especially given he failed to win immunity to save his spot in the game. Enter his then fiancé/now wife Lorie to sway the women into keeping him one more round and take out one of their own. Pretty simple. They’ll get him next time right? Wrong. Chris wins immunity. Damn. We’ll get him NEXT time. Oh wait, nope. No we won’t. Oh we will get him eventua…oh shit he wins??!?! CRAP! One of many cases of ‘the winner could’ve gone at that point’ but to me the one stand out and a fairly bad move by the girls alliance not to simply battle it out to the end and cut their final thorn in the side.

I honestly debated putting Brandon up higher than this as I feel him giving up immunity is overlooked by a certain other future Caramoan player giving up immunity, but he slides into the top 5 with his ill-timed decision to give up his security in the game to Albert and then promptly be voted out. Not one to discuss the strategic abilities of Brandon Hantz, he was on a very good track towards the end to make it to the FTC and if Jim Rice is to be believed in his recent interview with us, have a very very good shot at winning the game. Can you imagine that? Brandon Hantz winner of Survivor? Stranger things have happened…

4. James Gets Voted Out With Two Idols – China

Another simple piece of Survivor strategy for you kids: if you have not one, but TWO idols at the final 7, it’s a smart idea to just play one to guarantee final 6 and get yourself that little bit further. Even if he had of played one right after the other, that’s final 5. FINAL 5! In most seasons that gets you into the final episode which then gives you a real good shot at making the end! And let’s take a look at how that final 5 could’ve been had the same voting patterns followed after his vote out: James, Denise, Courtney, Amanda and Todd. A very very different season there had James gotten the opportunity to fight it out towards the end. James we love you and we know you always get this one moment brought up over and over again, but dude! PLAY YOUR IDOLS NEXT TIME!

Another moment that I feel doesn’t get looked as ‘dumb’ as much as it should, Lex single handily handed the game on a plate to ‘Romber’ with this one move. Yes, similar to JT/Russell earlier Lex couldn’t have possibly perceived what was happening with ‘Romber’ and that Lex wouldn’t be loyal to him and putting his trust into Rob was the move he thought best fit his endgame given the pre-game alliances that had been forged. But in what way did Lex feel that he would have Rob loyal to him after not playing the game with him AT ALL during the first 25 days? I feel even the most hardened friendships out of the game would struggle to connect and remain loyal with each other without factoring in all the events that occur in those 3 and a half weeks before they finally make the merge together. Lex had the prime opportunity to take the game into his hands then and then, cut Amber, make Rob have no choice but to be loyal to him and give us an entirely different ending and winner. I love you Lex, but dude that’s a tough pill to swallow.

The quintessential ‘dumb move’ in Survivor history. Erik makes final 5, wins immunity, has the opportunity to have the girls turn against each other and possibly continue on an immunity run right through to the end. But a young man surrounded by beautiful women will do strange things. Including giving up your security in the game and actually believe that they would be true to their word. Oh Erik. We love you. It’s a shame the girls didn’t at that point.

1. Manono Gives Up Immunity – One World

What’s dumber than one person giving up immunity? AN ENTIRE TRIBE GIVING UP IMMUNITY! The Manono men had the game on a plate and besides one small blip in the radar, had won every single immunity challenge to that point. The women were all over the place, and the men knew it. But with great power comes great responsibility. INCLUDING GIVING UP SECURITY IN THE GAME! I should point out that the ‘stupidity’ side of things comes from 7 out of the 8 who followed one man and his power. That man? Colton of course. No person in the history of the show has been able to transform their game so quickly and be the obvious first boot to literally controlling and running the camp in the space of a few days. The ultimate ability in his power? Getting 7 other men to willingly go to tribal on their own accord, fully knowing that each of them had a 1 in 7 chance of going home. The perfect irony would’ve been of course to vote out Colton that night, but nope. Follow him and follow him they did, take out Bill and go into a tribal swap with even numbers as opposed to the advantage. All it would’ve take was that extra man to potentially really switch things up, and the season would’ve been completely different. Jeff Probst’s (rehearsed) face on the night said it all.

HONOURABLE MENTIONS: Tyson gets himself voted out (Heroes vs Villains), Garrett  prevents tribe from discussing strategy (Cagayan), Rotu 4 and THAT challenge (Marquesas), NaOnka quits the game (Nicaragua), Matt re-aligns with Rob after returning to the game (Redemption Island), Cochran flips at the merge (South Pacific), Ciera flips one vote too late (Blood vs Water), Everything Drew did (San Juan Del Sur)